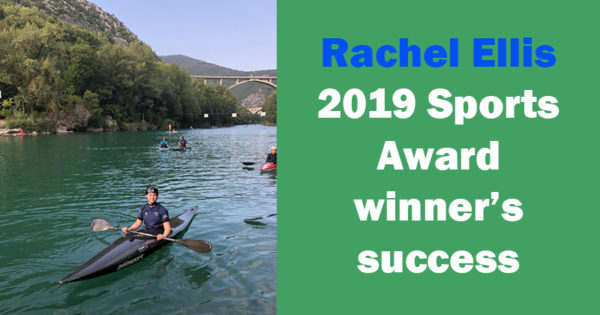 Rachel Ellis, winner of our 2019 Sports Award has been picked for the GB team to compete in canoeing and kayaking events.

This is Rachel’s final year competing as a junior and in August she took her place in the U18s squad representing Britain at the European Championships in Slovenia.

Like most athletes Rachel, 18 has had a tough couple of years with training suspended due to lockdowns.

But she comes from a sporty family – mum Lorraine and older sister Rebecca both play hockey while dad Paul is into rugby – and they have a home gym. So while she wasn’t able to get out on the water Rachel was working hard maintaining her fitness.

It was great to get back out on the water at Lee Valley last August and September, I managed a couple of months training before the second lockdown.

With selections at the end of May coinciding with exams (Rachel’s just finished sixth form at Broxbourne school) it was a hectic time. But competing in two days of races at Nottingham she achieved one of her milestones, to make it into the GB team for the sport she loves.

Rachel only took up canoeing six years ago, she continued:

Being out on the water, in the boat, on your own is a terrific feeling. It’s a unique sport and I love it.

As winner of the EFDC Sports Award Rachel received £1,000 which she put towards racing in Slovakia, Germany and France to get a feel for different waters.

At the time she was part of England’s National Talent Squad for under 18s and her aim was to make the GB junior squad to represent Great Britain at junior European and World Championships.