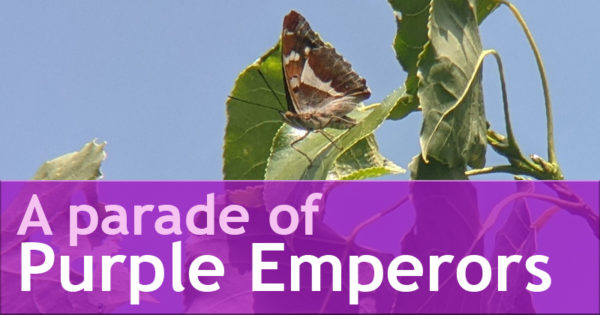 A particular highlight of this summer was observing the Purple Emperor butterflies at Roughtalley’s Wood in North Weald.

These elusive butterflies declined in the 20th Century due to habitat loss and fragmentation, creating localised populations in woodlands predominantly in the south of England – making this sighting all the more special.

The Purple Emperor is a high-flying butterfly, generally residing in the treetops where the adults feed on aphid honeydew and tree sap. The males, however, do venture to the ground to in search of minerals and salt which they often find either on the roads or in animal dung.

Horns on their head

On the other hand, the caterpillars have a much less smelly diet as they opt for various types of Willow, often Goat Willow.

Surprisingly, these caterpillars are often active at night-time, so keep an eye out for bright green and yellow caterpillars with “horns” on their head, as they may grow up to become beautiful Purple Emperors.

The Purple Emperor is one of a range of beautiful butterflies that can be found on our nature reserves including Red Admirals, Peacocks, Common Blues and many many more! There is plenty of wildlife to be seen in the district at this time of year, so why not check out the Summer Edition of the Countrycare Catch-up!