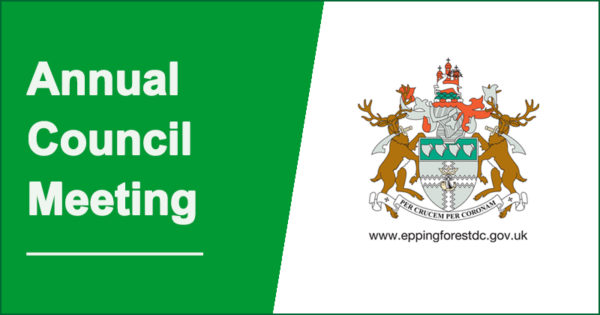 One of Cllr Helen Kane’s first duties as Chairman was to congratulate members who were re-elected and welcome the 8 new councillors who secured their seats at the district council elections earlier this month. The new councillors are:

This year’s Annual Council was held in the Civic Offices new conference suite in order to meet COVID safety measures. Members were encouraged to observe COVID guidelines and ceremonial speeches were kept to a minimum in line with ongoing COVID advice.

Click on the image to see photos from Annual Council on 25 May. Before the formal business of the meeting members observed a minute’s silence in respect of former chairman Brian Hudspeth who died recently.

Cllr Hudspeth, member for North Weald, was chairman in 1991/92 … the year of the opening of the current Civic Offices. Cllrs Murray and Morgan paid tribute to the man they described as “a wonderful ambassador for the district and a dedicated local councillor.”

Leader of the Council, Chris Whitbread said 2020/21 had been one of the most difficult years we have ever lived through and praised members and officers for their dedication and support in helping local people and businesses through unprecedented times.

He also praised the chairman and vice-chairman for their role in steering Epping Forest District through ‘a year like no other.’

Of the councillors who did not stand in this year’s elections Gagan Mohindra, John Knapman, Brian Sandler and Maggie McEwen received awards for their stalwart service to the council and each of the group leaders paid tribute to the 4 for their dedicated service to the district.

Cllr Chris Whitbread announced his Cabinet for the coming year saying he had added 2 new members, Cllrs Les Burrows and Darshan Sunger to the team, as he felt that some of the portfolios needed re-assigning to cope with the anticipated workload.

Cllr Burrows will work alongside colleagues on special projects and Cllr Sunger takes over corporate services.

Independent Councillor Stephen Murray praised Cabinet for its handling of all the many challenges brought by COVID-19 in the past year.

Cllr Stephen Murray, a teacher, raised a smile among members when he said:

You have steered the council really well in difficult times and I was going to give you a 10 out 0f 10, but no teacher does that because you must always leave room for improvement.