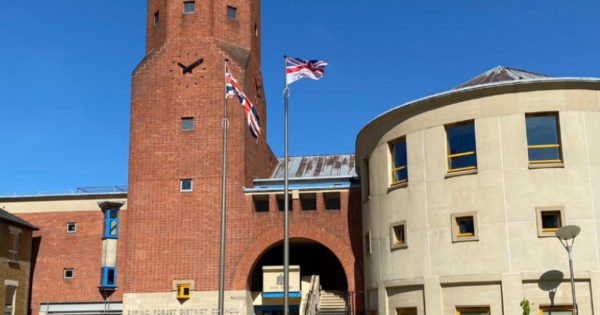 The week is a chance for us to show our support for the men and women that make up our Armed Forces community; from currently serving troops to service families, veterans and cadets.

These are the people that defend the UK and its interests, working around the world, promoting peace, delivering aid, tackling drug smugglers, providing security and fighting terrorism.

Despite many of the planned celebrations being cancelled due to COVID-19, she recorded a heartfelt message from her home.

Epping Forest along with many other councils around the country, will today be raising the Armed Forces flag as part of the countrywide celebrations to honour Britain’s Armed forces.

I am honoured, as Chairman of Epping Forest District Council, to be here to celebrate Armed Forces Day with you. In Epping today at the Civic Offices, we will raise the Armed Forces Day flag, which will continue to fly over the offices this week.

This year we commemorated the 75th Anniversary of VE Day and despite the effect of COVID-19 we still managed to show our appreciation to those who in the past sacrificed their way of life to ensure we all enjoy the life we hope to return to very soon.

Many of us had tea parties on our front gardens or dressed our homes in red, white and blue but we all still maintained social distancing. Something sadly, we will all still have to follow for many months to come.

We owe an incredible debt of gratitude to the brave men and women of our Armed Forces. They are the ultimate protectors of our peace and security and indeed, of our whole way of life. They are not there just to protect us from conflict but are often there on the front line of natural or man-made disasters.

As a nation, we all stand together whatever the situation and today we continue to be indebted to those who today risk their lives in many places around the world and to the veterans whose service we will never forget and always honour.

Earlier this year a number of employees from the district council attended a Veterans Mental Health Awareness training session, to increase awareness and gain a better understanding of issues often faced by veterans after leaving the armed services.

Each day of this week will be dedicated to different parts of the military.

Wednesday 24 June 2020 is earmarked to recognise our Reserve Forces.

Reservists give up their spare time to serve in the Reserve Forces, balancing civilian life with a military career to ensure should their country require them, they would be ready to serve as part of the military. Their contribution often goes unrecognised and as such the annual Reserves Day was created to highlight their valuable contribution.

Thursday 25 June is Veterans Day. A veteran is anyone who has served in the HM Armed Forces at any time and Armed Forces Day celebrates their continued role within the military community.

You can find out more information about support for veterans on the Verterans-UK website or by calling Veterans UK on 0808 1914218.

Unfortunately this years Armed Forces Day National Event hosted by Scarborough Borough Council has been cancelled due to COVID-19, but there are still a number of ways you can mark the day and get involved.

Armed Forces Day organisers will be sharing virtual content all week in honour of our Armed Forces, so do visit their Facebook and Twitter social media accounts.