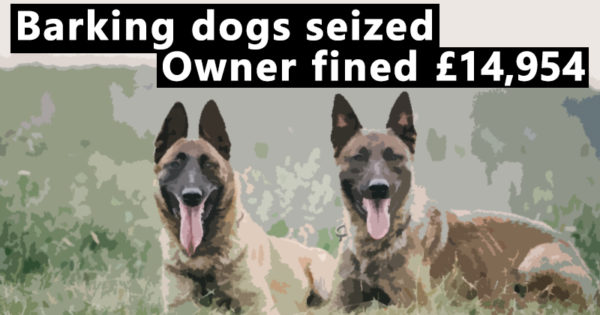 A Waltham Abbey man who allowed his dogs to cause a nuisance to neighbours has been fined and ordered to pay a further £11,000.

The dogs were seized by council officers and since been rehomed.

Mustafa Soydag of Orchard Gardens in Waltham Abbey was charged with 5 breaches of a community protection notice (CPN).

He was served with the notice in October 2020 requiring him to prevent further incidents of prolonged barking at his property.

Environmental Enforcement Officers continued to receive complaints. Despite 2 previous prosecutions Mr Soydag failed to comply with notices in force. Between 2 and 12 November 2021 officers witnessed 5 breaches of the CPN.

An application to magistrates for a warrant to enter the property and seize dogs was granted on 10 December 2021. On 14 December council officers alongside Essex Police and colleagues from the London Borough of Waltham Forest seized 2 Belgian Malinois dogs and took them to kennels.

Subsequently one of the dogs had a litter of 9 puppies which were all kept together in secure kennels.

On 1 June 2022 Mr Soydag appeared before Colchester Magistrates Court and changed his plea to guilty in respect of the 5 breaches of CPN and received a fine and costs of £3,954. A forfeiture application was adjourned for Mr Soydag to provide evidence of ownership of the dogs.

At Basildon Magistrates Court on 22 July 2022 he failed to provide any evidence. Council officers detailed the history of the long running case and previous action that had been taken. This resulted in a forfeiture order along with further costs of £11,000 to Mr Soydag.

All dogs have been rehomed through registered charities and not returned to Mr Soydag.

The team has broken new ground by successfully obtaining a forfeiture order for these dogs.

It is a nuisance to neighbours when dogs are continually allowed to bark, and distressing for the dogs too.

This case was particularly bad over a prolonged period of time, but it’s thanks to the diligence of the environmental enforcement officers that this man was finally brought to justice and neighbours can enjoy some peace and quiet.