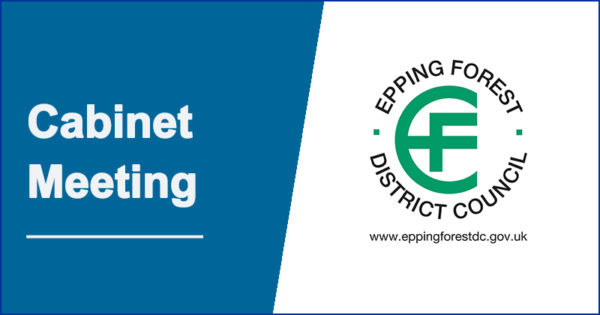 Refuse and recycling crews will be starting their rounds earlier in the morning over the next few days. Councillor Nigel Avey reported on the impact of the heatwave on recycling crews and his thanks to the teams for their continued hard work made harder by the hot weather.

Councillor Holly Whitbread reported that this is anti-social behaviour week, before presenting a brief summary of the minutes of the latest Council Housebuilding cabinet committee.

Councillor Helen Kane joined the latest meeting of Cabinet for her first report as chairman of the Overview and Scrutiny Committee.

PSL Print Management Limited will be awarded a 3-year contract with the option to extend for a further 2 years on an annual basis.

Cabinet gave approval for the Ongar Neighbourhood Plan produced by Ongar Town Council and Neighbourhood Plan Community Group to go forward to a local referendum of Ongar residents. Place portfolio holder Nigel Bedford told councillors that if approved by residents in September, the Neighbourhood Plan will become an important supporting document alongside the Local Plan.

Councillor Nigel Bedford also gave a Local Plan update. Following the appointment of a new planning inspector, a further period of consultation on the main modifications will take place later in the year. It is hoped the consultation can be completed during the autumn with a final Local Plan adoption by the end of the year.

Finance portfolio holder John Philip updated Cabinet on plans to spend £1 million from the government’s Shared Prosperity Fund across the district over three years. John Philip was keen to ensure the money is not spread too thinly. Investment should be targeted for maximum effect and ‘lasting legacy’.

Councillor Philip also provided updates on the Council’s wholly-owned company group Qualis, and the Council’s Quarter 4 budget monitoring report. He was very pleased to report ‘really positive news’ – that anticipated use of reserves is not required. The quarter figures are still subject to final audit, so Councillor Philip continued to remind cabinet of the tough financial times ahead.