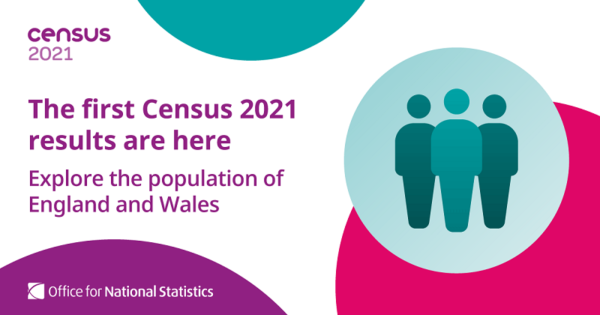 The first results from Census 2021 are out.

The first local data from the Census 2021 data has been released. The Census held every 10 years provides invaluable information to help plan for the future

The importance of the data goes far beyond human interest. You could be a student or teacher studying social trends, a business expanding into new markets, or a government organisation preparing for future service needs..

Later releases will provide much finer levels of detail. The first information is already providing a fascinating insight into the evolution of the district. The ONS website also provides comparison between Epping Forest District, other local areas and the national picture.

In Epping Forest the results show that:

Essex County Council has produced a comparison between districts and boroughs. You can see how Epping Forest District looks in comparison to its neighbours on the ECC website.

Nationally the results show that the usual resident population of England and Wales was 59,597,300 on Census Day, 21 March 2021.

This was the largest population ever recorded through a census in England and Wales – an increase of more than 3.5 million (6.3%) compared with Census Day 2011.

How is the data used?

The census helps inform the delivery of public services throughout the UK. Different groups and organisations use census statistics in a variety of ways. For example, academics use census population estimates for predicting trends, local authorities for planning policy and local services, businesses for product development and store locations, and local groups to support funding applications.

You can find out more about how the population has changed in different local authority areas and how they compare with others across England and Wales in the interactive article, How the population changed where you live.

These population and household population figures are the first in a series of Census 2021 data being released over the next two years. From October, until the end of the year, initial topic summary reports including demography, migration, ethnicity, religion, UK armed forces veterans, education, health, the labour market, sexual orientation and gender identity will be released.

You can find more information about the Census 2021 release plans on the ONS website.