Covid-19 impacted plans for our popular Civic Awards 2020 presentations due to take place in March at the Marriot, Waltham Abbey.

Winner shows commitment to our community

A replacement presentation planned for September at the NPAS hangar at North Weald Airfield also had to be cancelled due to ongoing issues around the pandemic. Instead past Chairman Cllr Richard Bassett has been visiting all award winners, at their homes (socially distanced of course) to present them with their certificates.

Who would have thought that instead of receiving their awards in March our worthy winners would have had to wait another eight months before we could make the presentations, I am delighted to have had the opportunity to thank them all individually for the commitment they have shown to our community.

Citizen of the Year

Judging of this award was too close to call, so for the first time in history two awards were made to Della Tudisca and Mary Morgan.

Della has worked tirelessly to raise money and arrange cardiac screenings through the charity CRY (Cardiac Risk in the Young).

The tragic loss of her 14-year-old daughter Isabelle from an undetected heart condition committed Della to raising awareness of the condition in the hope that further young lives could be saved.

Her commitment to raising funds to prevent other families suffering as hers did, has led her to run marathons and arrange charity events. To date she has raised more than £155,000 to fund screenings for more than 1,500 young people aged 14 – 35, some of whom have been found to have undiagnosed heart conditions.

She continues to work unstintingly for CRY – and a charity she has set up in memory of her daughter #forissy.

Mary has been responsible for the Churches Together in Epping and District Christmas dinners on Christmas Day for the past 26 years.

Dinner, presents, transport and entertainment are all part of the package for those who would otherwise be alone at this time of year.

Over the years around 1500 dinners have been provided for local people and the amount of organisation, fund-raising and sourcing of gifts takes many months. Getting everyone to the venue on the day is a logistical challenge.

Mary is an inspiration for the true meaning of Christmas and giving to others. 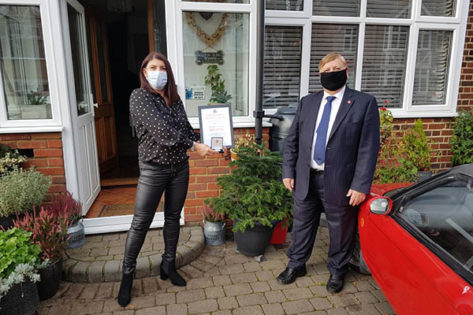 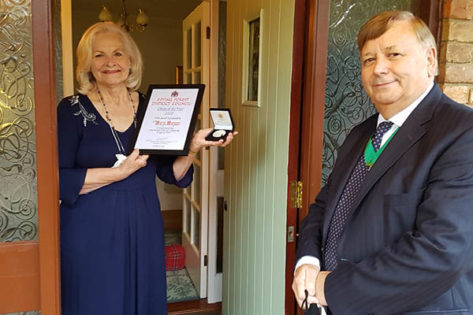 Young Citizen of the Year

Eloise Handleigh gives up her time to support a range of groups in the local community. In school she is a subject ambassador for History and supports a class of younger students, helping them to engage with history and make accelerated progress. She strives every week to ensure that the students push themselves to improve.

Outside of school she is a young leader for the Second Buckhurst Hill Guides and Brownies, helping run their meetings every Wednesday night.  She also gives time to look after elderly neighbours who are housebound.

On a personal level Eloise has had to overcome a times of great sadness after tragically losing a close friend. But she has been able to focus on the positive and move forward with the support of family and friends, to continue the great work she does for others in the community.

The judging panel was impressed by her maturity and sense of community. 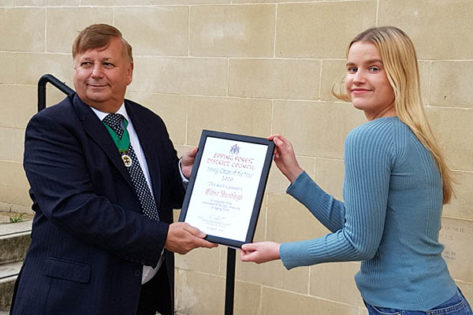 Katie McClean from Theydon Bois is blazing a trail for women’s football. She’s 15 and attends Davenant Foundation School in Loughton

Katie’s planning to spend her award on football boots, equipment and a refereeing course to further develop her skills and so that she can referee junior matches at the weekends when she’s not playing. She’d also like to have some fitness equipment to use at home in the garden.

Katie received a cheque for £1000 along with her certificate. 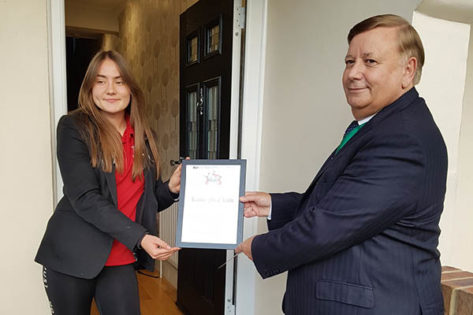 Abbey Performing Arts provides musical theatre classes for children and young adults of all abilities between the ages of 3 and 18.

APA showcases the talent and hard work of their 40+ members in annual pantomimes and musicals. They also provide accredited awards that not only give young people a chance to improve their skills and confidence but also contribute towards entrance exams and UCAS points when they are seeking university places.

We are proud to recognise such an organisation with a place in the heart of the community that engages young people in such a creative and valuable way.

They plan to use their £1000 award to help buy sound and staging equipment for performances in Waltham Abbey and throughout the district. 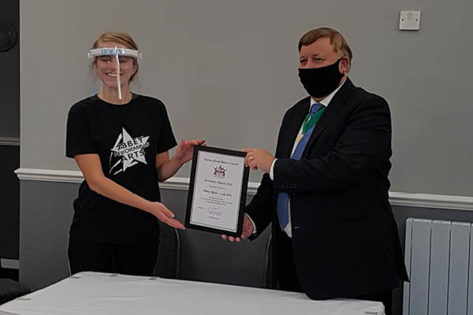 John Rout started his career in the NHS in May 1979 working at Honey Lane Hospital, Waltham Abbey.

In April 1983 he joined the Ambulance Service as an emergency medical technician. During his 40 years’ service John has shown dedication and commitment to the community of Epping Forest.

He’s been an outstanding crew mate to colleagues over the years, who respect and look up to him. He supports his peers and has always been an advocate for his patients, who love him.

One colleague said John is the guy you would want with you on a difficult call, he’s cool, calm and collected whatever the situation.

John’s mainly worked out of Waltham Abbey Ambulance station with a few short stints at Loughton and Stansted.

His managers say there is no one more deserving of this award, and the recognition of his career is perfect as John is retiring from the East of England Ambulance Service. 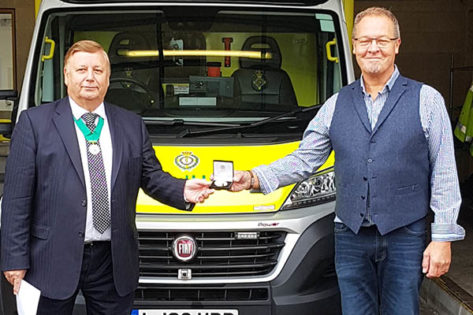 Crew Member Bradley Reynolds has served his community, working at Loughton – initially on White Watch but predominantly on Green Watch – as an operational firefighter for over 20 years.

During this time, he has responded to numerous incidents making a significant and dedicated safety contribution to the community he both protects and calls home.

A dedicated member of the station’s management team, Bradley often leads crews at dynamic operational incidents in and around the Epping Forest District and is respected by his colleagues for his leadership ability under pressure.

He reflects the best values and standards of the Fire and Rescue Service and continues to be motivated, enthusiastic and most importantly a professional, capable firefighter.

In addition to his traditional firefighting skills Bradley and his team at Loughton are also trained as Swift Water Rescue technicians. This difficult course requires dedication and determination to pass, which speaks volumes for Bradley’s commitment to professional development in the pursuance of saving lives.

The oldest Fire Service traditions to save life, prevent injury and render humanitarian services are clearly at the fore of Bradley’s commitment to serve and protect our community.

Community service Team of the Year

This year, for the first time, we introduced a category of Community Service Team of the Year – a team of people that makes a difference in our community and it goes to three officers in the Epping Forest District Police Community Safety Team.

This police team is directly funded and tasked by Epping Forest District Council. The officers have developed expertise in using intelligence led policing which has significantly contributed to reducing crime and disorder and making the district a safer place to live, work and visit.

In the last year alone, the team has seized stolen property or criminal assets estimated to be in excess of half a million pounds!

Police Officers regularly support council officers in carrying out their core duties, particularly if they present a risk of violence or intimidation.

They have demonstrated great professionalism, integrity and determination in delivering local pro-active policing and are a beacon of best practice in Essex. The medals are awarded to Sgt Neil Ross, Pc Karl England and Pc Steve Bowering. 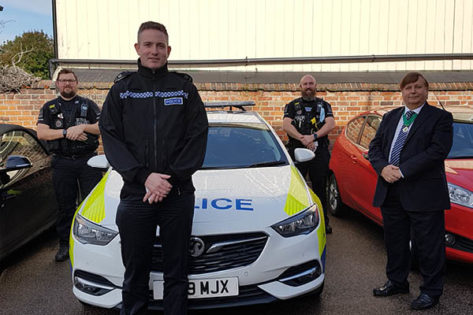 Team of the Year award

Sometimes it is impossible to highlight one individual within a team for special recognition, so the Team of the Year Award provides an excellent opportunity to recognise a group of worthy volunteers.

South Loughton Cricket Club prides itself on being a part of the community and investing in its young people.

The Under 12s team excelled by winning the Essex-wide Brian Taylor Trophy in a match at the Essex County Cricket Ground in Chelmsford.

The victory means they would represent Essex in the England and Wales Cricket Board’s National Under 13s championship. This is a remarkable achievement for a relatively small cricket club where eight members of the Under 12s team have also played in sides representing Essex and London. Other junior teams also reached four Metropolitan Essex District Cricket Board finals in 2019.

This is undoubtedly down to the coaching and support the boys have receive from the club which has just 40 adult players and around 100 boys and girls of all ages from five upwards. 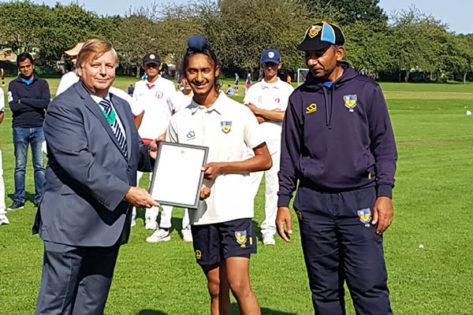 Congratulations to all our winners

We have all had to adapt and change how we normally live and work, but one positive thing to come from this awful situation is the wonderful stories of community and good will and I congratulate all of our award winners

Nominations are open for this Civic Awards 2020.