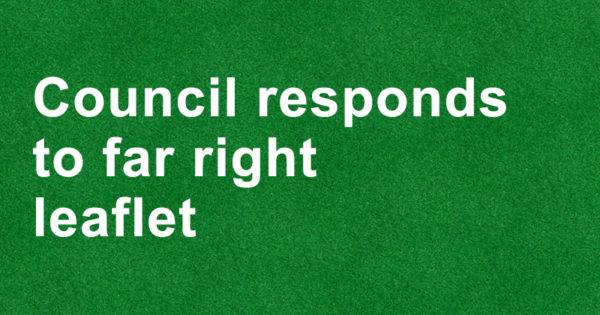 Some residents in Epping may have received a leaflet about the current use of the Bell Hotel.

Patriotic Alternative is a far-right, group linked to extremism. Anyone in receipt of the leaflet is encouraged to report it to the police.

Misrepresentations in the leaflet

The council would like to correct misrepresentations within the leaflet.

It also claims the district council has provided family sized homes to refugees. Councillors believe there is a moral duty to provide a measure of help to people who supported the British armed forces.

The Housing Cabinet Member took the decision in August 2021 to provide 2 family sized homes through the Government’s scheme to support Afghan refugees who supported British troops in Afghanistan.

On the current use the Bell Hotel – the Housing Cabinet portfolio holder has placed on public record that the district council was not consulted and did not consent to the use of the privately owned hotel by the Home Office. The council has given radio interviews and released press statements expressing concern about the use of the site for a number of reasons, including the impact on local services.

The Housing portfolio holder has also publicly expressed general concern about the use of hotels across the country for processing asylum seekers, outlining objections to the process and use of taxpayers’ money. Government plans to reduce the use of such hotels and tackle illegal immigration have been welcomed.

While there is genuine debate to be had on the best way to manage very difficult issues, all people should be treated with respect and dignity. Hatred and division has no place in our tolerant and democratic community.