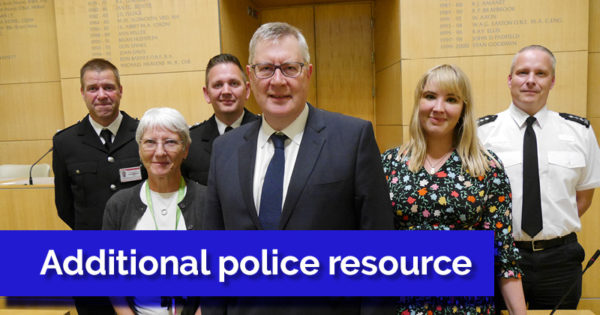 Epping Forest District Council’s dedicated police resource is being boosted by another officer under a new agreement with Essex Police.

Since 2018 the Council has paid for three officers – two PCs and a Sergeant – to be deployed in the community safety hub at the Civic Offices, in Epping and covering the whole of the district.

Councillors have agreed to renew the contract funding three police officers for a further three years. Essex police has agreed to add another PC to the team at no cost to the Council, increasing the number of dedicated officers from 3 to 4.

These officers provide a local police resource across the district’s communities with full powers of arrest and enforcement as well as supporting Council officers in specific areas of their work.

As well as their day-to-day operations they have provided added benefits such as being the local lead for four election processes and were heavily involved in two significant policing operations in the district:

The team also took the lead for planning and executing policing plans around Halloween 2019 which the District Commander commended as being ‘the best planned Halloween operation in recent years.”

Close management of the tasking process has ensured that our police team is deployed efficiently and effectively, crime in general has reduced across the district.

The addition of a further police officer will add value to our district by increasing the establishment to a sergeant and four police constables at no cost to the Council.