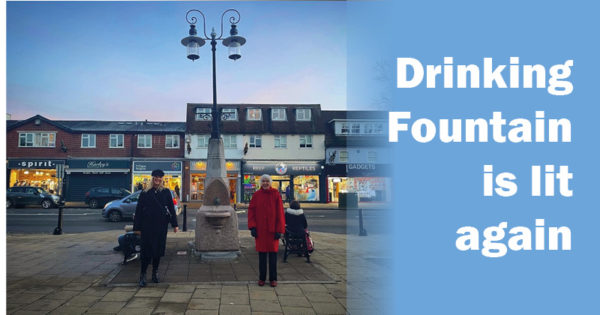 Epping’s Victorian drinking fountain which has a chequered 133-year history, has been lit again, as part of the Covid-19 High Street works.

Out with the old in with the new

New LED lights have replaced the old, frequently vandalized bulbs in the glass lampshades at the apex of the fountain.

Erected by the people of Epping in 1887 to celebrate the 50th year of Queen Victoria’s reign it was lost to the town and finally discovered under the Bakers Lane car park, thanks to a campaign by former district councillor Ann Miller.

EFDC funded its recovery and reinstatement outside what is now W H Smith in the High Street.

The fountain was thrown away in 1961 as part of a High Street refurbishment, I knew roughly where it was buried, so when I was Chairman of the Council in 1988/1989, I asked that it be found.
I knew it was somewhere buried under what is now Bakers Lane car park. Reluctantly, and with little hope of finding it, the search began with electric gadgets etc., but nothing was found. It was dug up by an excavator brought on site to dig the foundations for the new car park, the very next day!
It was taken away and refurbished, including restoring a water system and connecting electric lighting. In 1989 it was my pleasure to unveil this special monument which belonged to the town and to see it back in its original place.
I think it is one of one of the most memorable events of my life.
But four years later the water was turned off because of high maintenance costs and vandalism but the lighting remained for a while, until it too was vandalised with the lights smashed and wires dangerously exposed.

As part of the programme of works on our High Street during Covid-19, we decided to bring the lights back into use on what is a much-loved icon of Epping history.