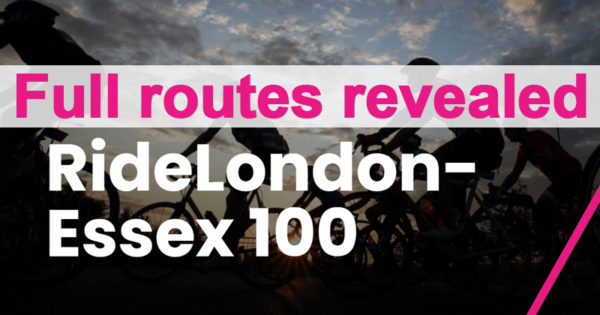 The full route for the first RideLondon-Essex on Sunday 29 May has been revealed.

Essex will welcome 25,000 cyclists on Sunday 29 May as RideLondon, the world’s greatest festival of cycling, comes to the county for the first time. Full details of the routes have been announced, along with the promise of new funding for Essex organisations to inspire activity in the local community.

This is the first year of a partnership between RideLondon and Essex County Council. The partnership brings the RideLondon-Essex 100, 60 and 30 mass participation rides into the county on Sunday 29 May.

In total there will be 65 miles of Essex roads included in the event routes, with cyclists passing through Epping, Ongar, Great Dunmow, Felsted and the outskirts of Chelmsford on the same roads used by the Tour de France when it came to the county in 2014.

Essex will also host 2 stages of the RideLondon Classique, a 3-day UCI Women’s WorldTour stage race for the best female riders in the world.

The details of the Classique routes will be announced in the coming weeks.

As a result of the new partnership between RideLondon and Essex County Council, communities right across Essex will soon benefit from significant funding from The London Marathon Charitable Trust – funding that will inspire activity and support people of all ages and abilities to participate in sport and physical activity.

During the first 7 years of RideLondon communities hosting the event were supported with more than £4.9 million of funding to local people and projects.

This is a very exciting new partnership with Essex County Council and together we have designed routes that showcase the very best of Essex, including a section of the 2014 Tour de France route, which will bring back fantastic memories for so many people who welcomed that event to the county so enthusiastically.

It’s an amazing sight to see so many cyclists on traffic-free roads, riding for all sorts of reasons, including raising important funds for charity, adding to the £80 million the event has raised since starting in 2013.

We’re delighted to be partnering with RideLondon.

Essex has a strong legacy in major cycling events, having previously hosted the mountain biking at the London 2012 Olympic Games and a stage of the Tour de France in 2014.

With our beautiful countryside and picturesque villages, there’s a lot more to Essex than a lot of people realise and we’re looking forward to showcasing the county to riders and spectators alike.

Our mission at The London Marathon Charitable Trust is to inspire activity, and we’re really looking forward to funding projects and organisations across Essex to do just that – helping people and communities make physical activity a regular part of their everyday lives.

During the 7 years RideLondon was held in Surrey, we awarded more than £4.9 million to projects locally that inspired activity.

We’re very excited to have the same impact in Essex and creating a lasting legacy from this partnership. 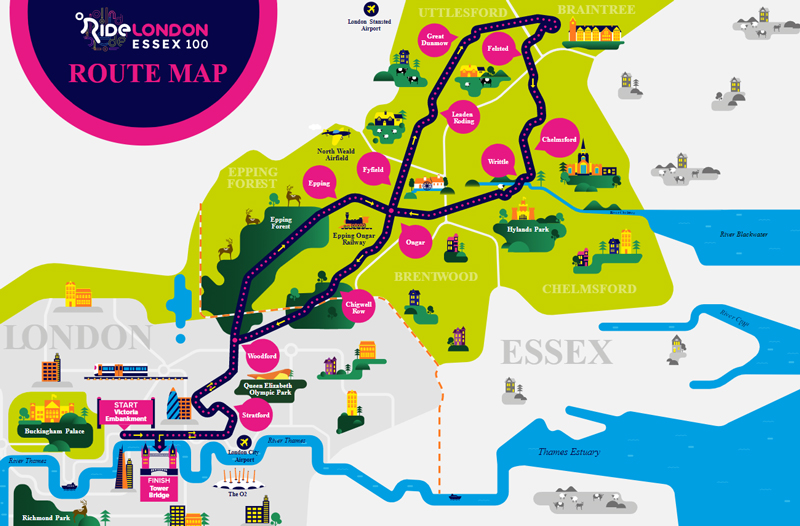 RideLondon-Essex 100 is the largest of the mass participation events and will feature thousands of riders, many of whom will be riding to raise crucial funds for charity.

The inaugural event will include a section of the same route used by the Tour de France when it came to the county in 2014. It will start in central London, enter Essex via Epping Forest and pass through Chipping Ongar and picturesque villages such as Fyfield and Leaden Roding before reaching Great Dunmow.

Felsted will mark just over halfway in the 100-mile ride, as cyclists head back south towards Chelmsford on the 2014 Tour de France route, heading west towards Writtle and then back towards Chipping Ongar, into London once more ahead of an iconic finish at Tower Bridge.

RideLondon-Essex 60 follows the same route as the 100-mile event, until it reaches Chipping Ongar where it will then turn back towards central London again.

RideLondon-Essex 30 reaches as far as Woodford before heading back to central London.

Roads on the routes will be fully closed on Sunday 29 May and businesses, residents and local organisations are urged to visit ridelondon.co.uk/road-closures to find out more about road closures and plan their travel.

A leaflet, with full details of the road closures, will be delivered to all households and businesses on or close to the route during April.