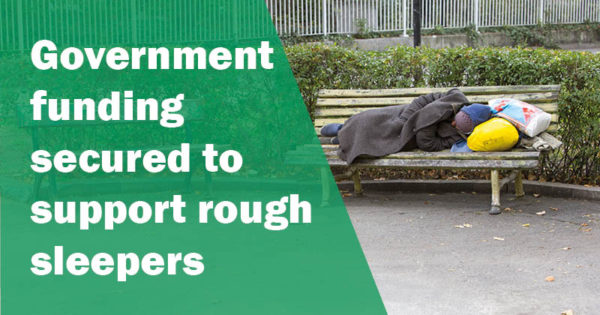 We received £34,656 from the Next Steps Accommodation Programme to help us accommodate rough sleepers under the ‘Everyone In Initiative’ – our pandemic response,

We are also getting £168,000 of longer term funding to support our work in preventing rough sleeping through our partnership with Chess –  our commissioned rough sleeper support service. This money takes us up to March 2024.

He didn’t have a drug or alcohol problem and didn’t recognise his depression as a mental health issue, he just felt there was no point to life anymore.

Terry was sleeping in factories/warehouses around an area in the district he knew well from his days as a lorry driver.

I’d be out over the fields and woods during the day. I wanted to be on my own to avoid trouble, then at night I’d find somewhere sheltered that I could bed down.

Married for 18 years with a daughter Terry had what seemed the perfect life – own home, nice car, holidays and an extended family with siblings, and parents who lived abroad.

When his marriage broke down, although he was depressed his family pulled him through.

But this time he didn’t want to admit failure again, so kept it from his family. But a cousin tracked him down and offered ad hoc support to keep him going and encouraged Terry to contact his local council to seek help.

Funding successfully secured from Government enabled EFDC to find Terry a room in a shared house to prevent him returning to the streets.

I had six good years with my second partner before it ended and to lose it twice hit me hard, my parents were elderly and retired so I didn’t want to burden them with it again, I was so ashamed.

All this happened four years ago and for two years he survived hand-to-mouth with no money – he stopped signing on because mentally and physically he wasn’t in a fit state to work – he just felt worthless and hopeless.

Phoning EFDC the day after his cousin encouraged him to do so, he was offered hotel accommodation, before moving on to the shared house.

On the streets you have to survive each day and there’s no time to be depressed. But within two days of being in the hotel depression hit me big time. I had a warm bed, tv and could make a drink when I wanted one, but I had time on my hands to think.

But the move to the shared house has given Terry renewed hope that he can move on …. though he’s sceptical about entering into a romantic relationship ever again.

I know now that this can happen to anyone. It’s made me a stronger person and I know I will make it back to a more stable life.