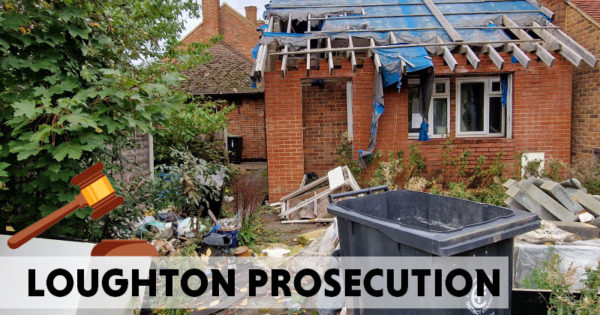 Magistrates described a bungalow in Willingale Road, Loughton as “an eyesore and a dangerous environmental risk” before imposing financial penalties and costs of more than £4,000 on the owner.

Daniel Harrington failed to respond to enforcement notices by Epping Forest District Council to clear up the property and fence it off to avoid further rubbish dumping.

He failed to attend 2 hearings in Chelmsford Magistrates Court and on the second occasion on 18 October 2022 magistrates agreed to deal with the matter in his absence.

On 19 November 2021 a notice had been served on Mr Harrington under the Local Government (Miscellaneous Provisions) act 1976 requiring him to provide details of the land ownership and any other persons having an interest in the property. In spite of a reminder being delivered to him at an address in east London on 13 December 2021 no response was received.

On 12 January 2022 further notices were served under the Prevention of Damage by Pests Act 1949 and Section 215 of the Town & Country Planning Act 1990 requiring him to clear the property of dumped rubbish that may harbour rats and mice. He was also required to clear the site of all waste, secure it with fencing and carry out regular inspections.

Mr Harrington ignored the notices in spite of being given reminders and so prosecution proceedings were begun by Epping Forest District Council.

He was fined £2,000 for failing to provide details of land ownership and £500 for the Town and Country Planning Act offence.

Having been shown photos of the condition of the property over a long period of time magistrates said it was awful for people living nearby.

Building works to the single storey bungalow had been stopped giving the impression it was abandoned and, with the property in this state, was being used for fly tipping.

This became self-perpetuating with others seeing it being used as a dump and adding their own rubbish – from fast food containers to a fridge, a sofa and more.

This case demonstrates that we take enforcement breaches extremely seriously and are prepared to engage the prosecution process if people refuse to comply.

The outcome is testament to the diligence and hard work of our Private Sector Housing Team in bringing this serious situation to court and achieving such a successful outcome.