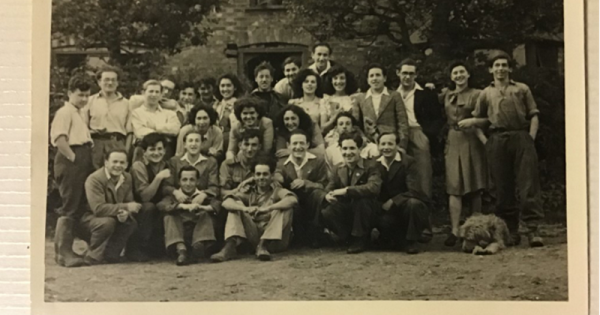 A group of boys evacuated from the WWII concentration camps and housed in Loughton is the subject of an exhibition by Epping Forest District Museum.

A £59,600 National Lottery Heritage Fund grant has been secured for the project which explores the story of the holocaust survivors sent to Holmehurst hostel, Loughton. It opens on 23 May through to 26 September at the museum in Waltham Abbey.

The youngsters were part of a contingent of child refugees brought to the UK under a government agreement following liberation of concentration camps in 1945.

The first group was taken from Theresienstadt concentration camp to Prague, flown to Carlisle Airport and on to Windermere in the Lake District where they were housed on an old RAF base to recover, rehabilitate and learn English. From here they were sent to hostels across the UK.

This project focuses on the 23 boys sent to Holmehurst, Loughton (now in Buckhurst Hill after parish boundary changes in 1996) and the staff who supported them during their time there.

Holmehurst in Manor Road, Buckhurst hill is now a private house. But for twelve months it was home to these boys recovering from their experiences in the concentration camps.

“Money raised by National Lottery players has made this exhibition possible. It marks 75 years since liberation of the camps and includes objects from the Jewish Museum and Imperial War Museum, London, along with first-hand accounts from the survivors themselves.”

Among the Holmehurst boys are:

Objects featured in the exhibition include items from Belsen, Auschwitz and Theresienstadt, camps familiar to the 700 or so child survivors.

The exhibition also showcases facsimiles of memory quilts made by survivors, their families and the 45’ Aid Society, for the 70th anniversary of the end of the war. The 45’ Aid Society is a charity set up to support survivors across the UK and is helping the museum with this exhibition.

Alongside and prior to the exhibition there will be a programme of workshops with members of the local Jewish community, school pupils and museum visitors. Activities also include work with the local Integration Support Service as an opportunity to celebrate the successful integration of migrants and refugees within the district.

As part of the project’s legacy, a learning resource for schools will be produced, along with a local history publication by Loughton & District Historical Society, to ensure this important local story continues to be told.

Anne Jenkins, Director, England, Midlands & East at The National Lottery Heritage Fund, said: “We are proud to support Epping Forest District Museum in exploring the stories of Holocaust Survivors in their local area. Thanks to National Lottery players, this project will strengthen the community’s knowledge of an important yet little-known element of their heritage and ensure that it won’t be forgotten.”

Angela Cohen, Chairman of the 45 Aid Society: “In this 75th year since their liberation, the ’45 Aid Society charity (which was set up by the ‘Boys’ to support other Holocaust survivors and teach the lessons of the Holocaust), is delighted to support Epping Forest District Museum in putting on this important exhibition. It tells the stories of those orphaned child survivors who were lucky enough to stay at Holmehurst hostel, where the staff and local community helped in their recuperation and recovery after the horrors they had experienced during the Holocaust.”

“We are also very grateful to the National Lottery for their support with this project and hope that it will give the local community a chance to learn about this vital part of history and, more importantly, help to ensure that it won’t happen again.”