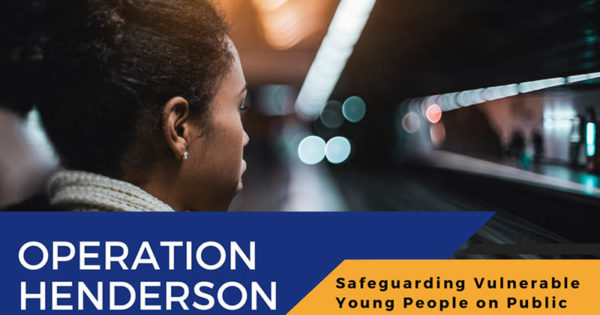 Campaign launches to raise awareness of the exploitation of vulnerable children on public transport.

On Tuesday 26 April campaign, known as Operation Henderson, is running to raise awareness of child exploitation at stations and transport networks in Essex.

Local outreach workers and community police will be engaging with passengers, businesses and young people at train and bus stations along identified key routes in Essex, to raise awareness about signs of exploitation and where to report concerns.

As well as members of the public, all staff working within and around a station, from ticket collectors to engineers, coffee shop workers to cleaners, play an important role in safeguarding vulnerable young people.

Research and local data have shown transport networks are used by vulnerable young people who may be at risk of sexual exploitation, criminal exploitation, and trafficking.

Young people often gravitate towards stations because they are anonymous places that provide some form of shelter and access to food and drink. A young person may use a station or form of public transport to ‘disappear’. Bus and rail networks can also be used by abusers to traffic young people for the purpose of sexual and criminal exploitation.

If there are concerns about suspicious activity at a train station, contact British Transport Police:

Resources for your business

Resources are available to download for local businesses, including leaflets for taxi drivers, bus operators and businesses.

For more information visit the Operation Henderson webpage on the Essex Safeguarding Children Board website.