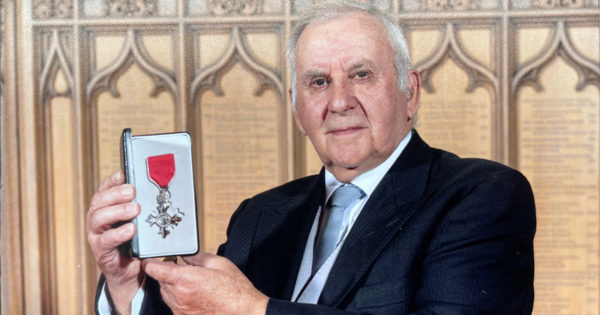 After a delay of more than18 months veteran councillor Richard Morgan MBE has been presented with his national honour at Windsor Castle, by HRH The Princess Royal.

Services to the community

The Honour of Member of the Most Excellent Order of the British Empire is in recognition of his services to the community.

After 38 years as an Epping Forest District Councillor Richard Morgan is still one of the most active and influential local members.

He has played a very active role across various committees culminating in cross-party support in his election to the role of Chairman of Council in 2004.

He was elected to the district council in 1983 and throughout that time has served, and represented local people in Moreton, Hastingwood, Matching and Sheering villages.

Richard also sat on a number of outside bodies and organisations including:

Nominations for the honour were not limited to the council, with his work as a Justice of the Peace, Rotary member, Assessor for the NFU (National Farmer Union) and other local bodies, also included in the citation.

A gentleman in every way

One of his nominators said of Richard:

He is a gentleman in every way and is always willing to help the local community in whatever way he can.

During his year as chairman he supported St Clare Hospice (Hastingwood), Chigwell Riding Trust, Cancer Research UK and the Air Ambulance based at North Weald Airfield.