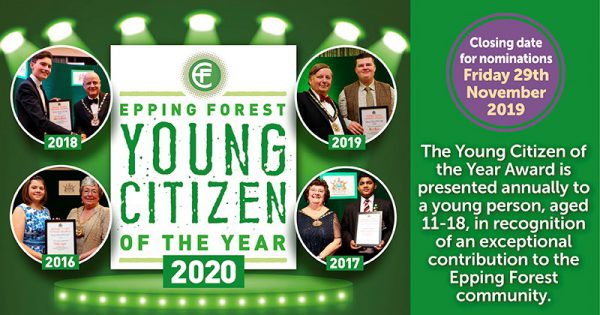 Searching for our Young Citizen of the Year

Nominations are open for the Epping Forest Young Citizen of the Year Award 2020.

This annual award recognises young people living in the Epping Forest District that have made an exceptional contribution to their community.  This can be in terms of outstanding courage, service to the community or showing extraordinary commitment, energy and effort in a particular cause or in achieving a particular goal.

If you know an 11-18 year old living in Epping Forest district who is eligible for nomination, we want to hear from you.

Finalists will be invited to the District Council`s Civic Awards in March 2020 where the winner will be announced and will receive £300 and a certificate of achievement.

Chairman of the Council, Councillor Richard Bassett said: “The Young Citizen of the Year Award highlights the positive contributions that young people make throughout our district in so many different ways. Many of these young people are unsung heroes and we want to recognise the tremendous contributions they make to their communities. So if someone springs to mind, now is the time to nominate them for a Civic Award.”

This year’s winner was Jack Rush from North Weald.  Jack was nominated because of his work as a Young Leader assisting with the cub and scout section.  He was described as an inspirational young man that the group look up to.

To nominate a young person for the Young Citizen of the Year award either:
• Complete the online nomination form
• Pick up a nomination form from the Civic Offices or from your secondary school.