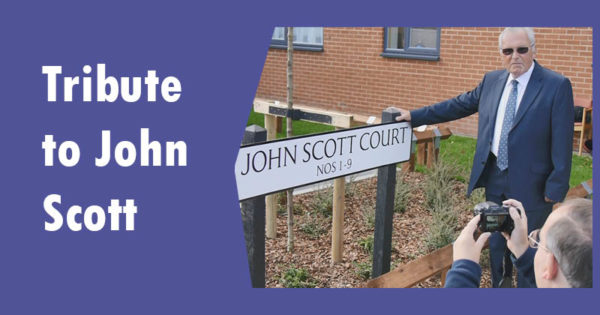 John Scott, whose name was so well known to generations of Epping Forest District Council tenants has passed away at the age of 71.

He had been suffering from Parkinson’s Disease for the last eight years but died from Covid-19 complications in King George Hospital.

John Henry Scott joined Epping Forest District Council as a housing manager and rose to become joint Chief Executive. As District Health and Housing Officer, his signature appeared on countless tenancy documents and agreements. His name was synonymous with house and home for thousands of local families.

When the council restarted its council house-building programme, John Scott Court in Waltham Abbey was named in his honour.

John Scott was part of the senior management team at Epping Forest District Council through the 1980s, ’90s and 2000s. In his early years he presided over the building of council housing. When the Right to Buy was introduced and councils were effectively stopped from building their own housing, he developed partnerships with housing associations to build many more homes for families in need.

After the war, many new council houses were built in Epping Forest for families bombed out of London. John presided over the replacement of the post-war pre-fabs, the last of which were in Loughton.

The drive for new homes also led to the construction of Pre-Cast Reinforced Concrete houses – a seemingly quick and cheap alternative to bricks and mortar at a time when the country desperately needed new housing. However, these houses soon started to show design faults. The steel reinforcement rusted and the concrete decayed.

John Scott inherited this problem and managed a reinstatement programme where roofs and floors were held up with scaffolding while walls were literally torn down and rebuilt.

As well as his formal housing roles, John Scott used his considerable talents and energy in a voluntary capacity, not least in support of people entering end of life care with St Clare Hospice.

John Scott was an ‘old-school’ public servant. Housing was his vocation. Sometimes seen as a gruff plain speaker (but also with a keen sense of humour), those closest to him knew him to be a sensitive man who cared deeply. Today, many thousands of people live in safe, warm, good quality housing thanks to John Scott’s legacy.