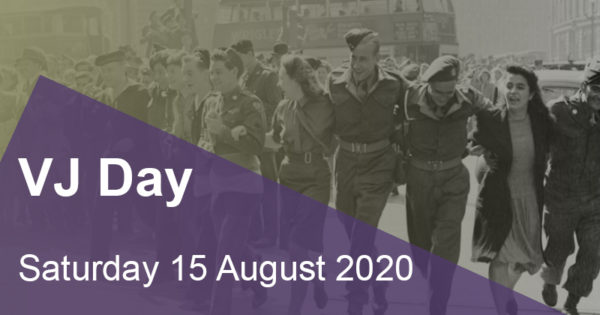 Saturday 15 August is Victory over Japan Day and marks 75 years since the end of the Second World War.

At 11am take part in the 2 minute silence in honour of those who served and lost their lives.

Whilst VE Day marked the end of the war in Europe in May 1945, many thousands of Armed Forces personnel were still involved in bitter fighting in the Far East.

On 15 August at 11am, the nation will come together in a 2 minute silence to remember and pay tribute to those who served around the world and the sacrifices they made for peace.

We must remember these brave veterans of the Far East campaign. They brought an end to the Second World War, they changed the course of history for the better, liberated South East Asia, and many paid the ultimate sacrifice.

On Saturday 15 August at 11am, we commemorate VJ Day and will come together as a nation for a 2 minutes silence to remember, give thanks and pay tribute to the endurance of those who served around the world and finally secured peace for us, 75 years ago.

We will remember them.