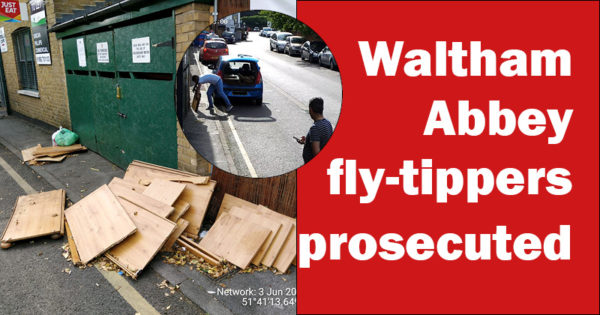 Two men were found guilty of fly-tipping and fined at the Magistrates court on 1 December 2020.

Evidence gathered by the Council’s Environmental Enforcement Officers showed that on or about 1 June 2019 Mr Mohsen Azizi had deposited a quantity of wood from his car in Darby Drive, Waltham Abbey, Essex. Mr Reza Savar acted as his lookout.

Both men were interviewed under caution by Environmental Enforcement Officers, and as a result prosecution proceedings were commenced against each of them. At a court hearing on 19 December 2019 Mr Azizi pleaded guilty to the fly tipping offence but Mr Savar pleaded not guilty to aiding and assisting Mr Azizi.

Due to the COVID 19 pandemic, the trial of Mr Savar did not take place until 1 December 2020. Neither Mr Azizi or Mr Savar attended court and the Magistrates found Mr Savar guilty in his absence.

The Magistrates stated that they were sure that Mr Savar had aided and assisted Mr Azizi in the fly tipping and had acted as his lookout.

Ordered to pay a fine

Mr Azizi was given credit for his guilty plea and was ordered to pay a fine of £1173. He was also ordered to pay a contribution towards the Council’s prosecution costs of £661.50 together with a Victim Surcharge £117.

Fly tipping is a blight on the Epping Forest District, and costs landowners across the East of England on average £1000 for each incident. It cost Essex council tax payers over £1 million a year to clear fly tipping from the Highway and other Council owned land.

The Council’s Environmental Enforcement Team will continue to work to address these issues, and take action where appropriate, in conjunction with partner organisations, to ensure that waste is removed by licenced waste carriers and disposed of responsibly.

If anyone is found fly tipping, or not complying with their household duty of care they may be offered a £400 Fixed Penalty, or, as in this case, prosecuted through the courts.

We need your help

Residents and business can help by ensuring that they: