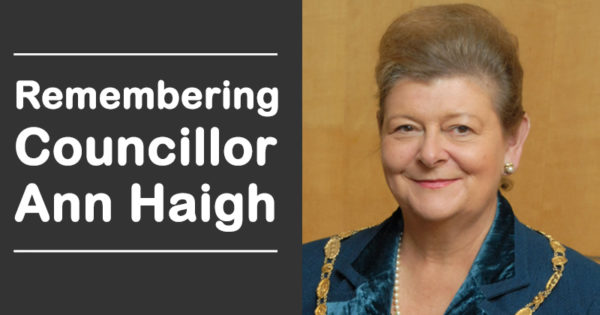 Elected to the council in 1996, Mrs Haigh represented residents of Buckhurst Hill and the district with great distinction for many years. She will be remembered with deep affection.

Councillor Haigh was appointed Chairman of Council in 2006 after holding a series of other positions. She was a great supporter of the arts and culture, as well as doing much to bring people of different faiths together. She was the last chairman of the District Council’s Leisure Services Committee before the adoption of the new cabinet model.

As a county councillor, Ann also acted as a spokesperson on children’s issues and education. She represented Barnardo’s at hearings of Parliamentary Select Committees and was involved in drafting the court rules and regulations for the Adoption and Children Act 2002.

Only last year, Ann was in contact with Epping Forest District Council to support recently arrived refugees from Afghanistan. She supported 3 special causes during her year as Chairman:

Always had time to listen

Ann was a dedicated councillor. She was someone who was easy to converse with and always had time to listen to others. Her gentle manner endeared her to people.

She was universally liked and admired across the council chamber and left a lasting impression on many people’s lives. I would like to offer my condolences on behalf of the council to Ann’s family. She will be deeply missed.

Ann Haigh was born in Wanstead and moved to Buckhurst Hill in 1969.

A minute’s silence will be held in honour of Mrs Haigh at the next full meeting of Epping Forest District Council on Tuesday 13 December 2022.