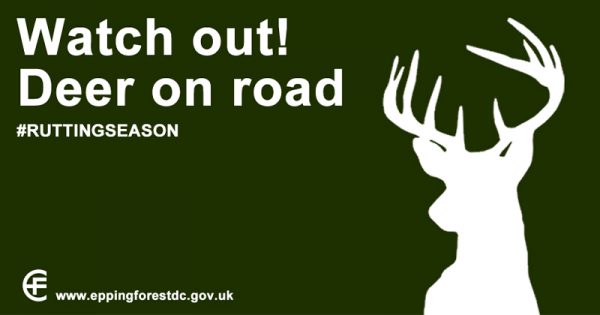 Take care on forest roads during the rutting season

October is the most exciting time of year if you are a deer, because it’s in the midst of the rutting season – a time when they engage in fierce mating battles.

Rutting activity is most intense soon after dawn and before dusk, though some activity occurs throughout the day.

“Epping Forest has a large deer population and sadly, the mortality rate for deer is still rising on the very busy forest roads and we urge motorists to take extra care when driving though Epping Forest District during the rutting season’” said Cllr Nigel Bedford, Community and Partnership Services Portfolio Holder.

Reducing the number of road casualties

The Forest Conservators have installed deer reflectors along a number of main roads as part of an ongoing project to reduce the number of road casualties.

Males, which are known as bucks, grow new antlers every year and around the time they lose them they claim a patch of ground as a rutting stand and advertise their presence with loud guttural bellows, attracting the female of the species known as Does. The Bucks fight off any rivals, often with tremendous battles of clashing antlers.

Epping Forest’s deer population is made up of dark fallow deer – thought to have been introduced to the Forest from Scandinavia by King James I – and Muntjac, a small Asian deer introduced by the 11th Duke of Bedford to his Woburn estate at the turn of the century. Escapees successfully bred and can be found throughout the Epping Forest District.

A Deer Sanctuary to the south west of Theydon Bois, provides safe grazing for a herd of just over 100 dark fallow deer. It is not open the public. Deer numbers outside the sanctuary are monitored on an annual basis, and a number of ‘deer glades’ have been created within the forest to provide safe feeding areas.

If you’re out and about in the forest during the rutting season it is wise to follow a few simple rules: